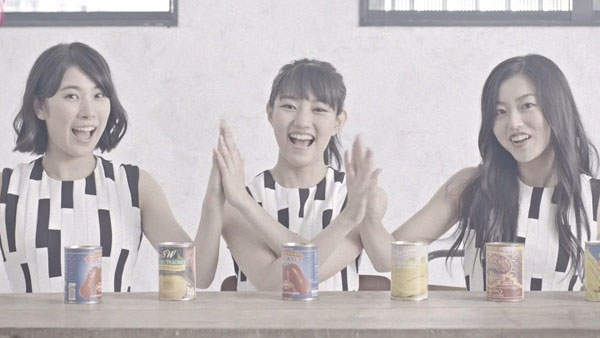 The consistently entertaining, artsy, somewhat self-produced group callme is back for another round. This time, they’re throwing out a PV to promote their upcoming album. It’s not really needed on my part as this group falls into a “shut up and take my money” section of my idol fandom. Still, new material is always good. This production may be a little more on the bland side, but callme’s bland is better than some groups’ best.

“Sing Along” presents us with props, sets, and effects that are similar to the film noir feel we saw in “Confession”. From the beginning however, this video is noticeably more basic in its presentation. “Confession” featured a brilliantly done mood lighting motif, but this PV’s lighting is uniformly bright. The use of props and effects are also quite a bit less clever in this one. Gone are the retro desk fans, subtle CGI transitions and the best use of blinds I’ve ever seen in a PV. In this video, props just sit there and are largely inconsequential.

Instead, the girls play around with empty fruit cans and hold cardboard signs that flow along with the lyrics. About the only CGI we get in this one is transitions that superimpose onto each other. There’s nothing wrong with any of this, but it’s just so simple. It’s atypical of this group. It does feel like a small step down.

Not all hope is lost, though. The retro sets fit in very well with their previous video to the point it seems familiar, and the cheaper effects result in some solo and group scenes where the members have a little more personality to them through expressions and interaction. Some of the PV is actually pretty fun. It’s refreshing to see callme in this light. Usually I come in expecting a high quality production, but to have a slightly more idol-like vibe from them was definitely a nice surprise.

The PV wins in the choreography department, unsurprisingly. The girls’ amazing performance abilities are on full display with ridiculously good timing and sync. The dance shots are executed with awesome precision, and their reaction to the various signs and goings-on in the video are always on point. The facial expressions in this one are also very pleasing. As I said above, this PV has some playful moments and the girls totally own the moment. It’s a lovely video, even if it does lack some of callme’s usual pomp and circumstance.

The song itself is pretty typical of recent callme music. The instrumentals consist of lovely soft pop elements with heavy reliance on a piano track. It’s not their most memorable tune, but if the biggest complaint I have is that it sounds a lot like their recent stuff, then that’s a good complaint to have anyway. Vocals are the usual ear melting goodness I’ve come to expect from the group. There’s no surprises in this song, but I can deal with more of the same from the likes of callme.