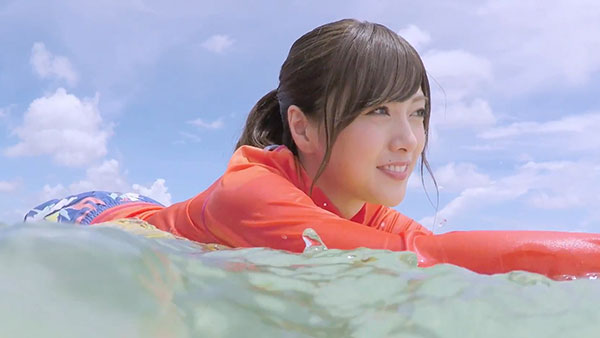 Summer’s still in full swing, so let’s surf our way into some more PVs! 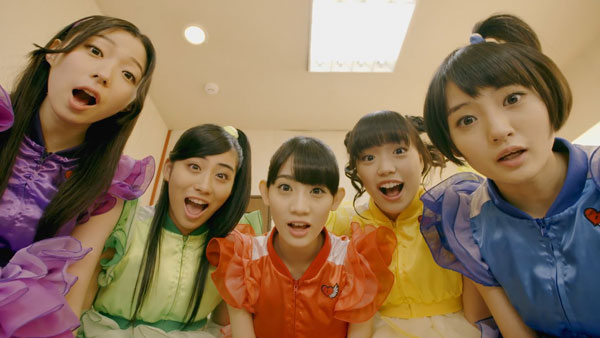 I may have been late to the Team Syachihoko bandwagon, but it has been a pretty fun ride despite my relatively short stay. Unfortunately the group is now flying in a missing man formation of sorts with Ando Yuzu out on an indefinite leave due to health issues. Definitely wishing her the best with all of that stuff. The previous Syachihoko release we saw was nice but relatively tame, but this one is more in line with their crazier side, and it benefits greatly from it.

I’m not really sure how to attack this one so I guess I’ll just go down the impression list. The first thing we really get a good look at is the outfits, and I really like them. They’re all very brightly colored in the usual colors assigned to each member and very frilly in design. They slightly resemble a one piece dress, but the frilly skirts are short enough to reveal shorts designed into the uniforms in a majority of the shots. The outfits are also made out of a glossy fabric which makes the colors look very strong on screen. Toward the end some gold accents and a gem power ball thing is added which matches what’s going on with the “story” of the PV. Good stuff.

The backdrop of this PV is a little mixed, but most of it is really awesome. The CGI portrays the story of the PV which boils down to this: Team Syachihoko is looking for their balls. Yeah. This video makes extensive use of special effects, which Team Syachihoko excel in pulling off. The designs and imagery are really random, ranging from Akimoto Honoka avoiding lasers to Sakamoto Haruna impaling an ojisan with her magical ping pong ball. Ito Chiyuri’s great rice balls of fire are also quite hilarious. All of these shots are amazingly done. I really can’t believe the production value that goes into Syachihoko’s PVs. The effects and how seamlessly the girls interact with them is extremely impressive every time.

The only negative is some of the less CGI-ridden scenes shamelessly show off the barren studio building this PV is shot in, complete with garage doors, electrical equipment and whatnot. It can be a little odd to see this amidst the magical stuff going on, but it’s a minor complaint amidst a plethora of eye candy. They also give a slight nod to the missing member in the scene where the girls put their balls in a shachihoko’s mouth(last ball pun I swear), a pink ball descends from the sky to fulfill its power. It’s cool to see they’re not writing Ando totally off just yet.

The CGI and action shots really are the main focus of this PV and there’s not much else to say. I think from the above it’s pretty obvious that the rest of the technicals are very well done. The camera work is downright amazing, and while the dance shot isn’t used extensively in this one, what’s there is executed well. This PV has a really nice edge to it all around much like the song does. It feels like this group can take any idea, load it to the brim with idol wackiness, top it off with a movie-like quality, and deliver an epic final product. Much props to everyone involved.

The song too is also quite good. I really enjoy when Team Syachihoko do something with a hint of rock. This one stays in pretty pop territory, but its got a good tempo to it. The instrumentals are really nice quality and the vocals are really fun to listen to. Pretty solid effort all around this time.

[Review] GANG PARADE – WE ARE the IDOL