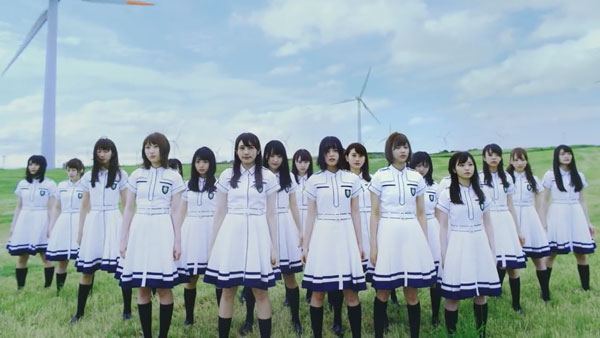 Keyakizaka46 really hit a home run with their first single. I really enjoyed “Silent Majority”, so I was obviously looking forward to their second offering. Unfortunately, song-wise, this one doesn’t hold up as well due to what I consider to be some bad design choices, but the PV is damn nice at least.

I think the thing that sticks out first and foremost is the use of lighting in this PV. The opening scene with Hirate Yurina in the gym makes use of some very well shot sunlight and it looks absolutely gorgeous. This motif of natural light beaming through windows is used throughout the PV’s indoor scenes and it looks absolutely wonderful. It really creates an atmosphere that compliments the sound of the song. It also naturally creates a slight dullness to the colors of the scene that Japan tries so desperately to recreate in post-production. To see it done in this way makes it feel like an artistic choice and less like a tacky trend.

Another positive of this PV is some really nice choreography. The dance shots filmed in the gym are really nice looking with a dance that gets pretty intricate at times. The outdoor shots have such a great landscape, but I think the producers messed these up just a little by having the girls spaced out so much. I’m afraid I don’t have a 70-inch 4k TV to figure out who’s who in these scenes. I do however really like the shots that are flying around the members. They look like they were filmed with a drone of some kind. I can only imagine the girls trying not to flinch as this thing whizzes by them. As someone who flies drones as a hobby, I can say it’s a bit unsettling to see one coming at your face.

The rest of the PV falls into fairly good territory. The outfits for this one are seifuku. Nothing really too special about them, but they look nice. There’s also some 46-style uniforms in the outdoor shots that are mostly white. They look okay, but they don’t even compare to the “Silent Majority” uniforms. Camerawork does a good job of following the action, however most members get few to zero solo shots in this one.

It’s easy to miss anyone not in the front row, which is a little disappointing considering how their previous A-side PV gave everyone a little time to shine. The group isn’t big enough to really excuse this. Post-production on this one is also fairly minimal which helps the beautiful use of lighting work as well as it does. While this is pure bias, the front row for this senbatsu is damn near perfect. All in all, this one turned out pretty well.

The song however, while I like it overall, I do have some issues with it. The biggest thing is the talking parts in it. I really, really don’t like songs that do this. I mean, it’s supposed to be a song, right? It’s really unfortunate too, because that aside the song is actually fairly good. The instrumentals fall into pretty typical 46 group territory with the usual light pop sound, and while the vocals stick almost purely to a full chorus, they sound pretty nice except for a few lines early on where there’s a heavy use of modulation. This A-side delivered on the PV front, but I’m hoping a B-side will give this single a better musical kick.