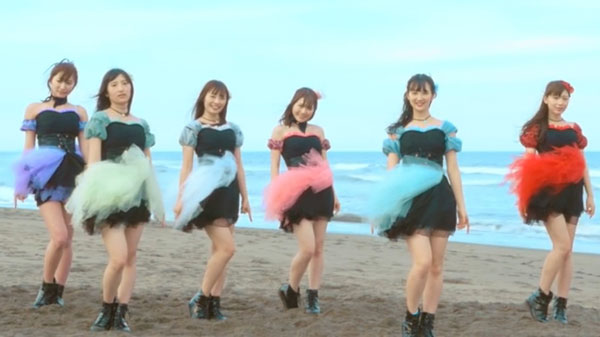 From their debut up until 2014, I had a lot of hype for palet. I just loved how they sounded as a group. Unfortunately, over half of the original group was lost to a series of graduations throughout 2015, and the sound I enjoyed started to slip away. While this one doesn’t exactly win me back, it’s at least nice enough to enjoy a little musically. The PV, though?…Eh.

This is a pretty straightforward PV. There’s a dance shot that, much like every other PV released recently, is filmed on a beach. There’s also a collection of member interaction scenes where they are painting a fairly crude mural of a rainbow and generally goofing around along that theme. The dancing choreography is not really impressive, but it’s not bad either. Then again, palet has never really been a group I went to for their sick moves on the dance floor, but it would be nice if after four years of being around they had a little more flare to them. Then again half the group has only been there for a fraction of that time. Sigh.

The member interaction shots really aren’t interesting or even photogenic. A majority of them look like they’re filmed in someone’s unsightly backyard. Seriously, that fence needs some repairs, and there’s an ugly old camper parked out there. On top of that, in some shots the girls look flat out bored. As far as atmosphere and choreography go this one is pretty disappointing.

Outfits are less than stellar. In the dance shots we get a collection of dresses that are mostly black with shoulder pieces and fabric over the skirts in the members’ assigned colors. They look alright, but aren’t terribly memorable. In the interaction shots the girls are dressed in casual wear. Emphasis on casual wear. It’s a lot of t-shirts and shorts or pants. One girl has a choker on, and that’s about all there is for any sense of style. I guess it fits the painting situation, but it sure makes those already troubled scenes look even cheaper.

If there is some praise I can offer the PV, it’s some of the technical side. I can appreciate the fact that the colors are presented naturally. The camerawork is okay. The scene selection for the dance is decent enough, but those darn interaction scenes are a series of close-ups that make it hard to see very much. That’s, uh, it. It’s really sad how much this group has dipped in quality compared to just two or three years ago.

As far as the song goes, I find it okay. It’s hard for me to not be a little bitter about it. I really can’t describe to you how much I loved how palet sounded as a group with its original set of members. They had a really epic chorus line and harmonized so well. palet as it is now sounds like generic idol vocals. Only in moments where Igusa Riona gets to shine do I really hear a sliver of the sound I miss so much. Instrumentals are okay, but again, this is extremely short of their past offerings which had so much personality to them. There’s a lot of generic idols out there that I find acceptable, but with this group, I can’t help but compare them to what they used to be.