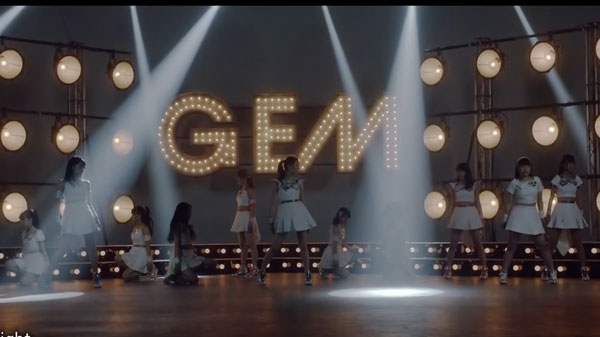 Much like Super Girls, GEM has seen some changes in the past month. Takeda Maya has begun her two year hiatus to study abroad, and two new members have joined the group. Change can be exciting, or not. Sadly, this release falls into the latter.

For the fist minute of this PV, it looks like someone forgot to pay the electric bill. As far as the lights go, it seems like we’re missing a few…dozen. I can appreciate the naturally presented colors, but it would be nice to be able to see a little better, too. As we transition into the chorus, the lighting situation does improve, but overall this PV is so flat technically. Even when the lights come on, they don’t change much. Many shots are filmed with a still camera, and what panning is put into use is very minimal and mechanical. This is GEM I’m watching right? The group always full of hype?

You’d think there’d be hype in the choreography right? Well, for a typical idol group this might be what I’d call passable, but just checking, this is Idol Street’s GEM, right? I’m sorry, but by their standards this dance is borderline dull. In and of itself, there’s really nothing wrong with it, but it’s so below what we know they’re capable of. There are some solo dance shots that have a little more GEM-ness to them, but they’re usually very brief shots before we go back to the group dance shot. I know we have some new members in play here, but did we need to slow things down this much?

Outfit-wise, there’s not a lot to write home about either, that’s one aspect I don’t really expect GEM to blow me away with anyway. They’ve had some nice ones, but they often default back to cheerleader-esque, dance-friendly uniforms and this is definitely one of those times. The outfits are white with highlights of the members’ assigned colors. They look nice enough, but they’re totally by the book. It’s fine. GEM’s a group of performers, not girls who excel at playing dress-up.

That’s really all this PV has to offer. There’s no story, no interaction shots, no wild aftereffects. I hate to say it about a group that has brought so many great releases, but this is a major disappointment. From any other idol group it might hold up as meh to decent-ish, but I hold GEM to a very high standard because they’ve delivered very high quality content the past two and a half years.

With the PV being so formulaic, we don’t really see much extra pushing for the new members. They get a random line and solo shot here and there, but it’s easy to miss them if you aren’t paying attention. Nishida Hirari is pretty cute, though. Looks like a young Ota Yuuri. They fit in well with what’s going on with the PV, but that’s not really saying too much.

The song too feels kinda forgettable. The instrumentals don’t even really sound like GEM to me. Instead, they sound like more typical Avex. Like something AAA might do for a B-side. It’s listenable, but I just wonder where all the hype went for this one. If I may get a little conspiracy theorist, I almost wonder if this was a rushed release for whatever reason. It feels very unpolished in every regard. That’s definitely not the GEM I know. I mean…they’re gems, right?

See what I did there?