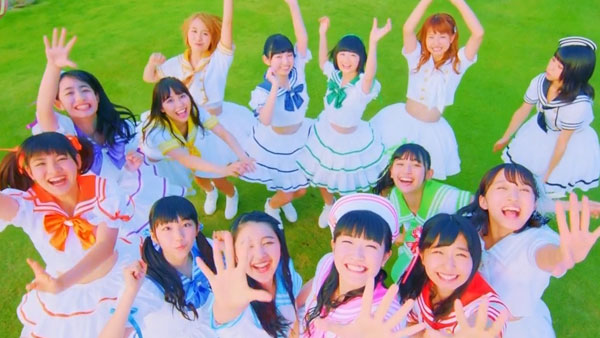 I always look forward to Super Girls’ summer releases. Their song style is a pretty great fit for upbeat, summer tunes and they pretty much always deliver on the gravure front as well. This time around though, I’m a little disappointed.

At first, things look promising. Asakawa Nana is shirtless, we’re heading up to a diving board, everything is great. Suddenly, my eyes! Once again a PV is downright assaulted by color modifications. The contrast is extremely high. Some shots don’t look too bad but others, namely the dance shots, are boiling over with contrast and washing out. I really wish I understood Japan’s fetish with destroying video with this pointless modification. There’s so many other things they could do to make the video look better, but I digress. Luckily the video is spared from anything else in post and largely presented as is. On a positive note, the camera work is decent and scene selection is largely satisfactory.

In an almost shocking move, this video doesn’t feature a metric ton of bikinis like their summer back catalog. They’re definitely there for most members, but with the exception of Asakawa, no one really gets down into their swimwear alone. In the dance shots, all of the members are wearing brightly colored seifuku-inspired tops and skirts. They look pretty nice but are definitely on the more generic side when you consider the attire from previous PVs.

In the member interaction shots, some gravure comes into play with most girls sporting a bikini top covered partially, mostly, or entirely by various sun dresses, tank tops, jerseys, or a combination of the above. Everyone looks very nice, don’t get me wrong, but I’m used to this being the group that delivers on the gravure. If I may talk like a guy for a second, it’s kind of disappointing. It’s also kind of interesting that the less endowed members, such as Tanaka Mirei and Mizote Ruka, show the most skin. As a Ruka fan I can’t complain. Usually she’s relegated to her one solo line and we don’t see much of her, so there’s definitely some positive in this video for me. Still, it’s just odd. To put it bluntly, where are the boobs? This is the group that shows the boobs in July!

As far as the choreography goes there really isn’t a lot going on in this PV when you break it down. The interaction shots are all by the book and mostly random in nature. There’s some good member interaction but none of it is excessively memorable. Same for the dance. It’s executed well, but there’s no big moves in this one. It’s also worth noting that this PV premieres the five new members that make up this groups third generation, or “chapter” as they seem to be referring to it.

These new members integrate well with the PV and are interacted with by their senpai prominently. It’s cool to see some fresh faces, I guess. At a first impression, I think Kidoguchi Sakurako (wow, that’s a name) is pretty darn cute. She’s the one in the pink jersey with “67” written on it who looks a bit like Horita Aika from Shiritsu Ebisu Chuugaku. Cute girl. I guess the producers decided it was time to bring the group’s average age down, huh? It makes sense though. It’s crazy to think about, but this group is nearly six years old!

As far as the song goes, I don’t really have any complaints but I don’t really have a ton of praise either. It sounds mostly like a Super Girls song, but the instrumentals are missing a lot of that power that they usually have. Honestly, it sounds more like generic idol pop than typical idol street pop. The tempo and transitions in the song frankly remind me of old school AKB48 more than they do Super Girls. Luckily I said old school AKB and I can hang with it, but it’s definitely off from their usual. Vocals are about the same as usual with a decent chorus and the usual couple of memorable voices carrying the song through. It’s not bad, just pretty average.