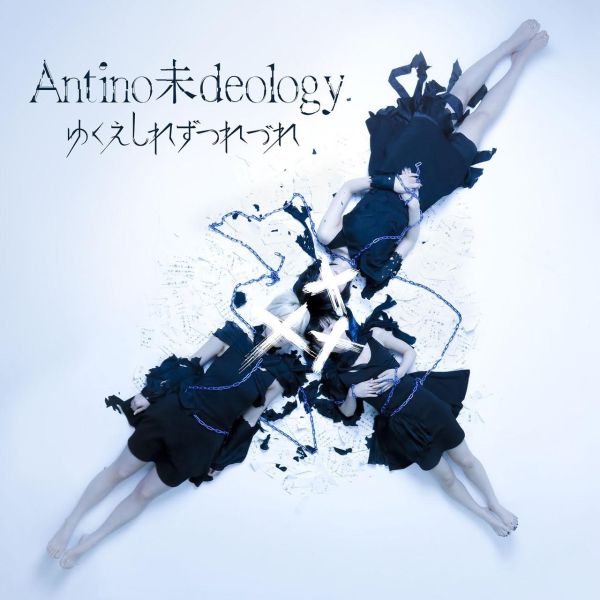 My thoughts on the most recent release from tongue twister idol group Yukueshirezutsurezure.

My quest to clear my review backlog comes to an end this week with Yukueshirezutsurezure and their debut EP “Antino未deology” which came out about a month and a half ago. Not the most timely review in the world but there’s not much I can do about that. Credit for getting me into this group once again goes to Homicidols. If you haven’t checked that site out at this point then I guess you probably aren’t going to, but you really should. It’s my one stop shop for all things alternative in the idol world.

Anyway, Yukueshirezutsurezure are still an incredibly new group, so introductions are in order. They’re a four piece at the time of writing this (they had a line-up change just before this EP came out) and they tout themselves as “Yami Kawaii” idols which is basically a kind of sick (as in twisted) cuteness. They’re also the sister group to Zenbu Kimi no Sei da, a group that I’m particularly fond of and will one day get around to writing about on this site.

The most striking thing about them for me is just how raw and open they are with their thoughts and emotions. There’s actually an interview out there that explains it far better than I ever could, so I’ll let you read that in your own time. The gist of it is that Yukueshirezutsurezure are a very tortured group of individuals, so let’s see what sort of music a group like this creates.

The EP kicks off with “Ideology” which sports a very familiar opening instrumental, but I can’t quite place where I’ve heard it before. The vocals start up very calmly and on the quiet side before going absolutely crazy with these great guttural screamed lyrics. The song then flips to a more typical cutesy idol vocal style, creating an almost schizophrenic characteristic which persists throughout the remainder of the song. The delivery of both lyrical styles is great, and the instrumentals do their job of providing a base to the song, without getting in the way of what is obviously the more important feature in the vocals.

“Kyousoukaichinari” is up next and features some assistance from sister group Zenbu Kimi no Sei da. We open with a very soothing acoustic guitar instrumental, backed by some drums which lead into some very soothing vocals. In what appears to be a developing pattern, the ears are then greeted with a snapshot of more screaming before things return to relative calm. Zenbu Kimi no Sei da’s role in this song is pretty understated, but I felt it added enough to warrant them being there but without taking the spotlight away from Yukueshirezutsurezure.

“Gunjou” rounds out the first half of the EP and the instrumentals take on a slightly harder edge than we’ve seen so far. The vocals are also fairly normal…for the most part anyway. It’s a pretty short song, so there’s not too much to make mention of really. Probably the most accessible song as far as mainstream listeners go thus far, which I guess is always a good thing to have in your back pocket should the need arise. Short, kinda sweet and to the point.

Opening up the second half of this EP is a job that falls to “Tsuredzure Sanka”. It opens with what can only really be described as a wall of noise, which is sung over with some rather catchy idol style vocals. We’re then treated to a period of relative, albeit rather uncomfortable, melancholic calm before the opening section is repeated with similar fervor. That’s pretty much the story of the whole song, there isn’t much screaming on this one, apart from one rather wild section near the end. This is probably my second favorite song off of the EP.

The penultimate song on Yukueshirezutsurezure’s debut EP is “Shinjuku Cinema Connection”, which is a pretty awesome title for a song. It features Mashiro and Gomochi from Zenbu Kimi no Sei da and opens with a pretty awesome (and melancholic) piano and synthesizer combo. From there we’re treated to some pleasant pop vocals that are a feature of much of the song, except for the few moments of madness that are somewhat of a Tsuredzure hallmark at this point. It’s a great song that a lot of people who are put off by Tsuredzure’s screaming in other songs will probably never give a chance. My favorite song on the EP.

The EP closes on “Kagami Soushou ni Nari” (I really hope I got that right) which opens up sounding like a nursery rhyme before yet another descent into the madness that only Tsuredzure can provide. Normality is of course restored eventually and the song is actually really good for what is essentially a ballad at times. The chorus in particular is very pleasant to listen to. It’s basically a partially redone version of “Kyousoukaichinari” which is no bad thing.

I don’t really have anything negative to say about this EP. Obviously if you absolutely detest screaming in songs in any capacity then this isn’t for you at all. I’m kinda into that though, and I really enjoyed the theme of jumbled thoughts and madness that a lot of the songs provided. Yukueshirezutsurezure are definitely not the finished article, and how could they be given their 6 short months of existence. That being said, any group taking cues from Maison Book Girl, Oyasumi Hologram, Guso Drop and Zenbu Kimi no Sei da are more than alright in my book.

Yukueshirezutsurezure have their first physical single coming out next month, so I’d say there’s a pretty safe bet that I’ll be reviewing that as soon as I can get my hands on it. Maybe one of you who can actually write in Japanese could put in a good word for me.