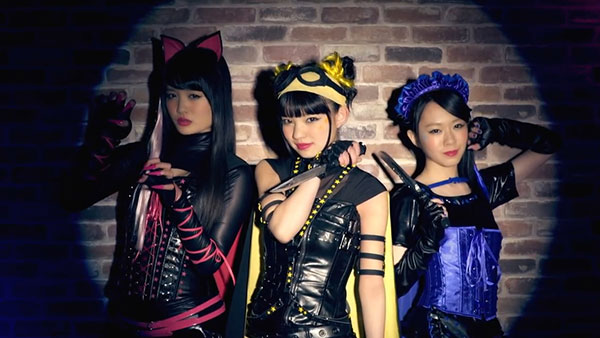 I first became aware of Dianna Sweet in early 2015 during my time with The Evening Show. Right away I was very taken with their sound. Their image sometimes feels a bit beyond some of the members’ years, but is always very well executed. Despite losing half of the group in the past year, they’ve maintained the same awesome sound and it looks like their image quality is still really good.

On the topic of image, we see pretty quickly that this PV makes use of quite a bit of CGI backdrop and aftereffects. A majority of the scenes are inspired by comic book panels, and the backgrounds often feature this motif in one way or another. The execution isn’t movie quality, but it’s presented very casually so it works.

A majority of the PV is composed of shots of the girls striking epic poses and battling a villain that looks like Captain America took a side job as a clown and joined the evil side. There are also the typical dance and members singing shots, of course. These scenes do a good job of featuring the girls in their outfits, one of which is a bit on the wild side. They’re a very weird but awesome mix of heroine meets S&M latex. And of course the youngest member, Suzuki Azumi, gets the wildest outfit. That’s Japan for you I guess. While not being the most kosher outfits, they’re very well designed and look really good. The other outfit is a one piece dress more typical to the group’s style. They’re white with gold features and look really nice.

This PV also benefits greatly from aftereffects going into making the scenery cooler and not just brighter. The colors are mostly left alone, which seems so rare in PVs these days that I consider it a positive attribute. Any time I can look at an idol and not get eye strain from an absurd contrast ratio is a good time. The effects are all very well integrated, and the camera work and/or member green screen placements are seamless. There are some member solo and group shots of the girls in front of a brick wall striking poses that are especially memorable for how great they look. Dianna Sweet has often given us really cool, stylized PV’s and this one is no exception.

As for the song itself, it’s very reminiscent of their previous singles. Works for me, man. I’ve been a huge fan of pretty much all of their music. I really love the unique, kinda sultry style of the instrumentals of this group as well as their sister group Predianna. It really is a unique sound across the idol realm and maybe even J-Pop in general, and I always listen to them when it comes up on rotation. Despite all of the member loss, their vocals sound pretty similar to how they’ve always been, and while it may not blow me away and they use a decent amount of voice modification on them, I really like how it integrates with the instrumentals. I sure hope this group can stop with the graduations and whatnot, because I really enjoy their material.