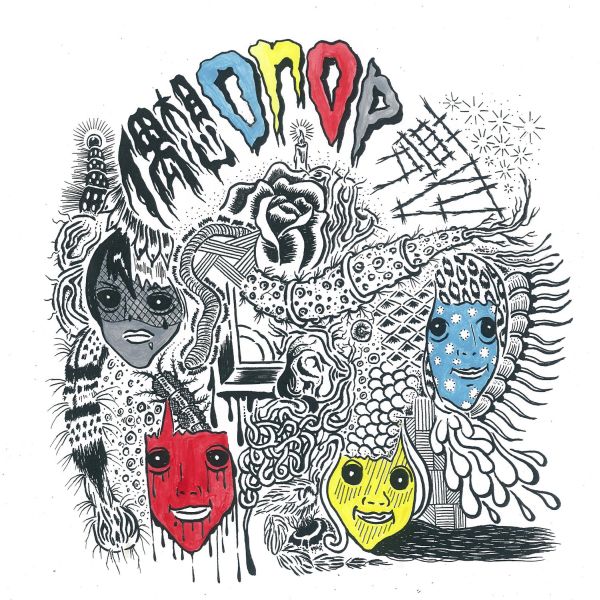 My thoughts on the new EP from “the heaviest idols in the world” Guso Drop.

Oh look, I’m reviewing a release from a group that I’ve never written about before (on this site anyway). That’s kinda exciting right? This release is also a bit heavier than the music I normally review, so readers of a sensitive disposition might want to take this moment to click away now. Although I guess you’ll probably be fine as long as you don’t press play on any of the videos. Still, disclaimers and all that, especially in this day and age where people get “triggered” by the slightest thing.

Anyways, today Guso Drop finally get an article written about them on this site. I’ve been an admirer of them for a while now, although I did kinda take a roundabout way of getting into them. For those of you who don’t know, Saki (or, the red one) is also a solo artist under the “2&” moniker. It was 2& that I initially discovered through their song “Negaposi Monster”, back when it was still a duo scenario. That song is still great by the way, but yeah things just kinda fell into place from there and I ended up finding out about Guso Drop.

Guso Drop have put out several CD releases so far, and “Yume shi” is the latest entry in their discography. They claim to be the “heaviest idols in the world”, because let’s face it everyone needs a gimmick. That being said, their music is some pretty heavy stuff. How heavy is it exactly? Well, let’s talk about that shall we?

The EP opens with the self-titled song “Guso Drop”. To be honest, calling this a song might be reaching a little bit. It’s basically Guso Drop’s version of “the mix” as well as a member call-out type deal. It clocks in at a trim minute and a half which I guess is fine for a piece that isn’t really meant to be doing too much in the first place. It’s an enjoyable listen, but I don’t know if an EP is the best venue for this kind of thing.

“Hirari Hira Hira” kicks off what I guess I would consider the real meat of this EP. It mixes a lot of heavy metal elements with a synth dominated chorus, something we see becoming somewhat of a theme in this particular sub-genre of idols. There’s also a pretty blood curdling scream in this song that I thought was really impressive, especially seeing as it didn’t seem like they did much of anything to clean it up in post production. I also appreciated the use of hooks, despite the heavy style of music they were going for.

“I do! I do!” does away with the synths and instead focuses on the more traditional guitar and drums setup. It’s a very high tempo song that I can imagine being very popular in a live setting. The instrumentals in this song are incredibly on the money, with the guitar riffs specifically being rather enjoyable to my ears. On the vocal side of things, again there are hooks present (if you can call the repetitive backing vocals that) and while there’s no impressive screaming to speak of, all of the girls have a part to play, which is always a plus in my book.

The EP is rounded out by a song simply titled “No.18”. The synths make a return here, on what is probably the most casual listener friendly song on this release. It’s still definitely a Guso Drop song, but it’s not really helping their claim of being the “heaviest idols in the world”. Not that it particularly matters though, and songs like these are a good way of showing that a group isn’t completely one-dimensional. In fact, this might be my favorite song on the whole EP. Funny that.

It’s hard for me to criticize a lot of the stuff I write about, mainly because if I hated it so much, then why would I write about it in the first place? That being said, I’ll toss a couple of “warnings” your way. If you don’t like idols that do heavy metal style music, this ain’t for you. Also, if production value on vocals, etc is the be all and end all then you’re probably going to have issues here. BABYMETAL level production this is not, but given how lacking in personality that last BABYMETAL album was it might not be a bad thing. I personally don’t mind if things are a little rough around the edges but I know there’s people out there that do so you’ve been warned.

Finally, are Guso Drop the “heaviest idols in the world”? I think the jury has yet to reach a verdict on that one, but the fact it’s even up for debate is a good thing I think. It shows that a sub-genre of idol music that’s often unfairly criticized for “ripping off BABYMETAL” must be doing something right and Guso Drop are definitely one of the groups leading the charge.