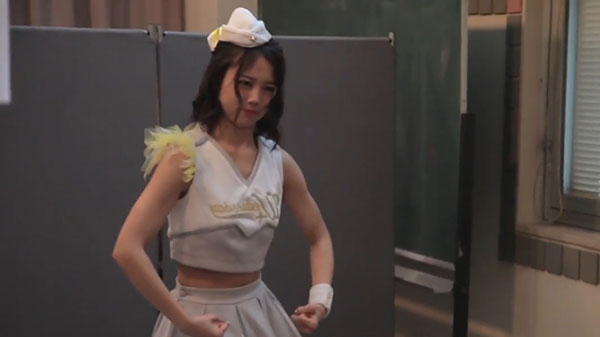 This week on PV Roundup, PASSPO hard carries the deadest week I’ve ever had since I started writing here. Good thing I reviewed something from March by mistake or we’d really be up shit creek!

PASSPO is back for another round already! This is really awesome to see as their single releases slowed down drastically after 2013. This time, we’re getting a B-side PV which isn’t too common with this group. They’re also breaking new ground by doing a member themed song for the first time. These can go either way, but luckily PASSPO takes everything good about themselves and crams it into this simple, but awesome video.

My first impression of this video is familiarity. The outfits used are the same ones we saw earlier this year in “Mr. Wednesday”. They’re slightly redecorated with some frills on the tops, but other than that they’re pretty much the same. I’m tempted to take off points, but remember, this is just the B-side PV. Hopefully they’re saving up for something awesome on the A-side, but they’re all pretty gorgeous so in the end it’s all good.

The shots for this PV are a bit “rough” for stylistic purposes. Quite a bit of the PV uses a performance from a free one man live they did at Yoyogi Park in mid-May. The surrounding shots appear to be from the backstage of this event. Most of it is staged with the girls pandering to the camera, but some of it appears to just be random silliness as well. Everything about how the PV is shot gives it a very unpolished feel, which in this case is a brilliant choice on the producer’s part. It plays into the song perfectly, giving the PV a very personal feel.

Tying into the above, there’s really not a lot of choreography to this PV aside from the dancing on stage, which itself is pretty loose and disorderly. Again, it’s what you want with this kind of song. It’s all about the fun times with our dear idols rather than nailing sick moves or stomping to the beat. I guess the real choreography is the scene selection, which is very well done in this video. There’s just the right mix of fun times and live footage.

As for the song, man…to think I was really worried about this label change to Crown Records. If anything, PASSPO has totally got their mojo back since changing over. I didn’t mind them being experimental from time to time, but I’ve so missed this kind of music that I fell in love with years ago. It feels like old school PASSPO to an awesome degree. The instrumentals are very high energy, rock-laden idol badassness.

The singing is pretty typical of what you can expect from PASSPO. As usual, my favorite parts of the song are Morishi’s. She doesn’t really belt out the epic notes in this one. Instead she gets a nice yell out for “Yucky”…I mean, Yukki. Seriously though, Morishi’s power on stage is just the best thing ever. It may be the most fulfilling thing I did in Japan, telling her that. Man, she was so good.