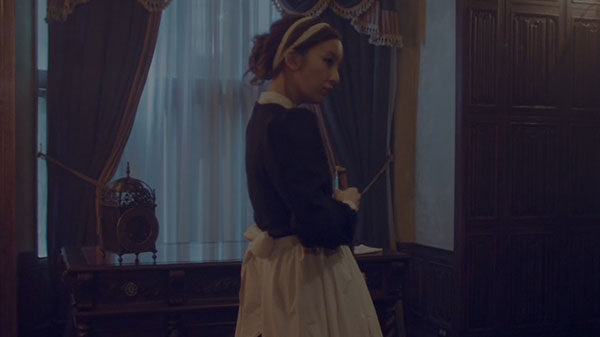 Itano Tomomi is an interesting one. Her music is some of the most westernized, crazy stuff I’ve heard a (former?) idol do, but there is always this really awesome quality to it that draws me in. This one lacks the wackiness of the likes of “Swaggalicious” or the infamous “Come Party”, but there’s still something about it that that’s just so fun song-wise. The video lags just a bit behind it, though.

It’s hard to not be pleased with any visuals involving Itano Tomomi. To me, she’s ridiculously attractive and looks good in just about anything. In the opening shots of the PV, we’re treated to Tomochin wearing a french maid-inspired outfit. It actually looks more loyal to the real thing instead of being revealing and idolized. It’s simple and refreshing. We’re treated to one other outfit in the dance scenes, which is a light blue dress. She looks pretty wonderful as she’s dancing with some prince dude.

Rather than relying on epic dance shots like we’re used to with Tomochin’s releases, this PV relies on “story”. Maid Tomochin looks upon her richer looking self dancing with the man of the hour. Mostly because he’s the only one there. The fairy tail soon ends as Prince Ikemen transforms into a half wolf, half Hellboy…thing, who chases Princess Swagglicious and strikes her down.

I wish the PV was as amusing as the description I just came up with. It’s honestly a bit disjointed, as we see a seemingly aged maid Tomochin with a really scarred neck before we see wolf boy. It left me scratching my head and killed the mood the first third of this PV had set up. It was kind of annoying for the PV to take this turn because it was just fine as it was. The story part isn’t awful, but it felt fairly unnecessary.

There’s really not a lot else to say about the PV other than the above. One bit of praise I can give the PV is about its fantastic use of color filters. For once, huh? They’re a bit faded and the lighting is low, but just right. It gives off the dark vibe the theme demands, but you can still see everything. Producers of similarly lit PV’s can really learn a lot from this one. If some parts of the PV were just a little more interesting, this would have been a winner, but it’s still pretty good.

As far as the song goes, I really like this one. I don’t know what it is about Tomochin, but her music lures me right in. Most of it is rather silly, extremely western, and well, swaggalicious, but it also has a really high production value to it. This one follows the production trend, but does away with some of the swag for a more subdued tone, and Tomochin owns it.

Effort goes into her production, and it makes it unironically good in a guilty pleasure kind of way. I also really love her voice. It’s like some kind of bizarre mix of typical idol and Koda Kumi. Maybe even a bit of Shiina Ringo in there sometimes. Her voice is like salsa, it has a little of everything in it. I love me some salsa.