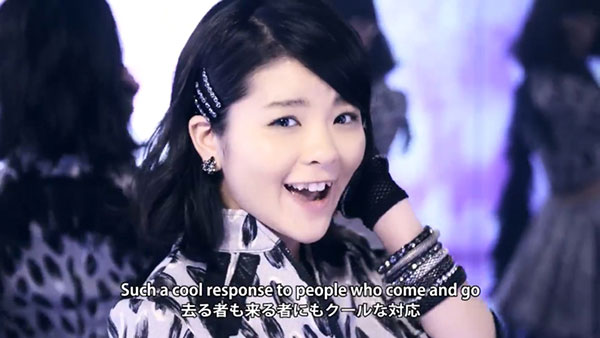 ANGERME was kind of a home-run last year. “Taiki Bansei” might be the most awesome (re?)debut I’ve ever seen, and their following singles were quite enjoyable as well. This group also saved me from quite a bit of heartache. Between quickly losing my Country Girls oshi Shimamura Uta, and later in the year my Morning Musume oshi Sayashi Riho, my Hello! Project free fall was stopped by Murota Mizuki, who would later become my H!P grand master oshi and one of my top idols period. ANGERME is checking into this year a bit later than before, but it was more than worth the wait.

Right away the PV starts with an awesome buildup. We are presented with the newest member of ANGERME, Kamikokuryo Moe, whose name I’m not sure I’ll ever be able to type without copy-pasting. She more than holds her own throughout the PV, and never looks behind in skill or out of place in any way. She’s also very cute. No complaints about her at all. She’s a wonderful addition to the group from what I see here.

Jumping back to the start of the PV, after our introduction to Moe we get a few other really nice member shots, leading right into some marching steps tied in nicely to the song’s intro. Suddenly, boom, the hype begins and doesn’t let up in the slightest until the song is over. We’re presented with a constant, awesome flow of dance shots of the group, mixed in with a satisfying amount of solo and sub-group member dance shots as well as some dramatic solo shots. Typical concept, pretty badass execution.

While I think the member screen time distribution is pretty good, Takeuchi Akari and Tamura Meimi pretty much own this song and PV. For Meimi it’s for good reason. Much to the displeasure of many, myself and definitely Garry included, this will be her last single with the group. Booo! This PV is a showcase of the awesome performer that will be leaving us. Her rapping parts and solo lines are simply glorious. Take-chan also has similar scenes and man, that girl can really dance and nail some striking poses and expressions.

Speaking of expressions, Sasaki Rikako also continues to impress. To me, a really good performer keeps their game face on no matter what they’re doing, and all you need to do is see Rikako in action at the three minute twenty-seven second mark to know she’s a pro. This is not to say anyone not mentioned did anywhere near bad, but this PV definitely had a few stars.

The outfits are satisfactory but nothing too amazing. From a distance the tops seem to have a leopard print, but up close…I’m not sure what those are. Weird modern art, perhaps. Some girls have skirts, some have pants, some have shorts… they’re moving around too much to really notice or even care. The dancing is really good in this PV, very fast paced and plays up to the hype of the song well. I guess if I have to have any complaint about the PV, there is one thing I could do with a lot less of. Say it with me, boys and girls, COLOR FILTER! As is often the case with Japanese videos, it’s off the chart. I’m not even sure if the outfits are supposed to be white or purple.

Anyway, that’s enough complaining, because it’s time to rave about the song now. I wish I had a more elegant way to say it, but holy crap is this song awesome. From the stomping and whispers of the title at the beginning, to the EDM-ish beat, to the awesomely executed rap breakdowns, to Take-chan’s awesome lead-ins to the terrific chorus, this is pure ear candy. It’s high energy and never wavers for a full five minutes. Easily the best H!P song of 2016 for me so far.

ANGERME’s consistency so far is right up their with BAND-MAID’s. Please forgive two overly positive ratings in one roundup, but holy shit this is so good.

ANGERME’s 4th single, or 21st single depending on how you want to think about it, drops April 27th.