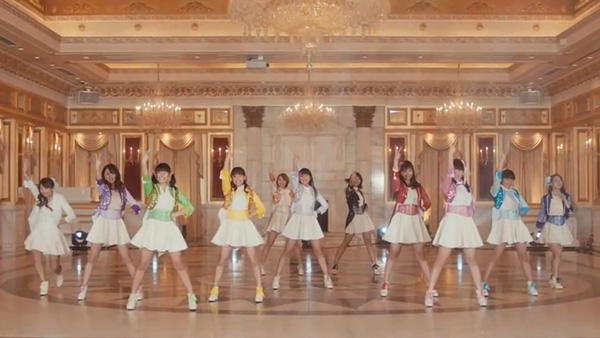 SUPER☆GiRLS seems to be pretty polarizing in my circles. I’m on this group’s side, personally. They’re a really attractive and fun set of girls with catchy as hell music. Usually. If you’re of the same mindset as me, I think you’ll find this a fun, yet uninspired release.

This video is pretty simple. A majority of it is the dance shot which is pretty energetic and par for SUPER☆GiRLS’ course. It’s also shot in a fairly nice looking ballroom, which is a nice change from the often barren feel of dance shot settings. There’s also a decent amount of smaller group and solo shots which are nice enough. The outfits are fairly generic white tops and skirts with a sparkly jacket in the members’ colors. Nothing to really write home about, but they’re cute enough.

Song-wise, this is cookie cutter SUPER☆GiRLS stuff. Don’t pay too close attention to it and it easily sounds like several of their past songs. There’s nothing new in this at all. It’s the same kind of lively, drum-happy instrumentals, the same featured vocals, and the same kind of hooks. Lucky for me, I really enjoy typical SUPER☆GiRLS, but anyone expecting anything new may not be too hype for this song.

Don’t get me wrong, though, none of the above is an insult to this PV. I think it’s quite nice actually, but really, it is a shining example of sticking to the formula.