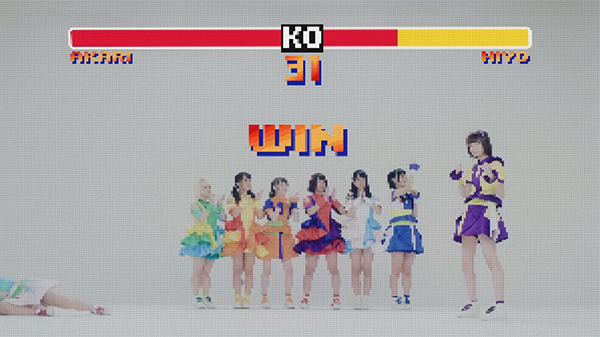 I can’t really tell you a lot about FES☆TIVE, in all honesty. I just watch their PVs when they release one because they’re usually pretty fun. Somewhere along the way I ended up following Yokoi Hinami on Twitter. They’re a pretty fun group from what little I see of them. Yeah, that’s all the exposition I have. Pardon my casualness.

This video is really bright and full of effects. This is actually a nice touch for the PV as the set pieces are pretty boring. The dance shots are filmed in a solid white studio, and what’s not in there seems to be shot in a cramped clothes shop. Not exactly riveting stuff, but the silly effects make it easy to gloss over.

Despite the monochrome setting, the dance shots are pretty energetic and fun. The shop setting features some nice clips of the girls, but are pretty meh on the whole. There’s not a lot of room for them to move around in there, and well, they didn’t. Luckily this PV does have at least one “hey, that’s cool” moment. The 8-bit fighting game throwback shots with Akari Shina and Momohara Hiyo are pretty cool. I will definitely have to learn more about this Hiyo girl. She’s really cute, and kinda reminds me of Asahi Nao looks-wise.

The song is fun to listen to, but nothing really to write home about. It’s a typical high energy idol pop song. It has some guitar to it as well giving it a tiny bit of a rock edge at points, but it’s negligible. This would definitely be a fun song to see live and mix to, and in the end that’s what matters for these smaller idol groups, I guess. It’s pretty fun, but not a technical marvel in the slightest. To use a phrase I tend to overuse, it’s formulaic but well presented. I’ll try to come up with some clever synonyms for that in the future.