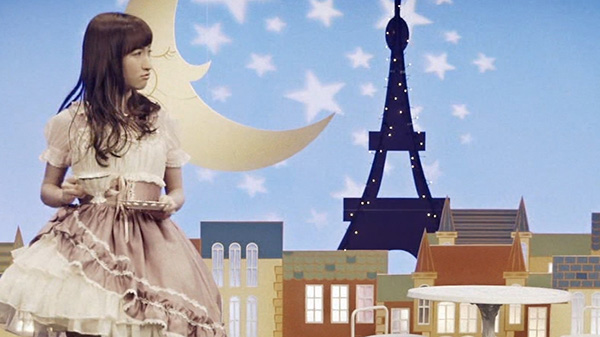 So yeah, in between work tiring me out of doing much and general laziness, I had to delay a post already. Many apologies, and rest assured my pay has been docked. Don’t pout like Yamaki Risa, we’re back on track and all is well!

BAND-MAID® was a huge part of my idol fandom last year. In my end of the year awards post on Tumblr, they took best PV, best album, and tied for best artist. As a “journalist”, even a hobby one, I feel duty bound to try and be at least a little objective. With that being said, this PV is amazingly good.

This PV takes BAND-MAID® to the more rock side of J-Pop/Rock. The video is a little darker in both lighting and tone than their previous ones, and does away with the outdoor shots and stylized aftereffects in favor of some good ‘ol fashioned rockin’ out.

One of the major draws of this group is that they are real musicians, and it shows in their PVs. I could watch Touno Kanami go ham on her guitar all day long. It’s so legit! You should definitely pay close attention at the 2:22 mark. Their videos are no doubt well produced in general, but the legitimacy of it all definitely makes for a deeper connection with these awesome girls, as opposed to a PV of girls just throwing instrument props around.

Their outfits are more of the same of what we’ve seen before. There’s not a lot they can do in the way of variety as long as they remain loyal to the maid concept, but it doesn’t really matter. The maid thing is part of their identity, but it’s not really the long term draw to me. Once you get swept up into the music, it’s not even on the radar. In addition these girls are, in so few words, super, super, SUPER fine. Gorgeous faces to look at also distracts from any lack of outfit diversity.

Song-wise, this might be one of their top releases for me. It’s so damn good. Just as we saw on the video end, this song goes more to the rock side of things and these girls totally own it. We’re also treated to some vocals that are an octave or two lower than their norm, and again, they nail it. The instrumentals are extremely high quality. They don’t feel watered down at all, unlike a lot of idol “rock” songs.

BAND-MAID® seem to be following their format from last year of releasing PVs leading up to a bigger release. “Alone” is part of the upcoming mini-album, “Brand New MAID”, scheduled to drop May 18th.