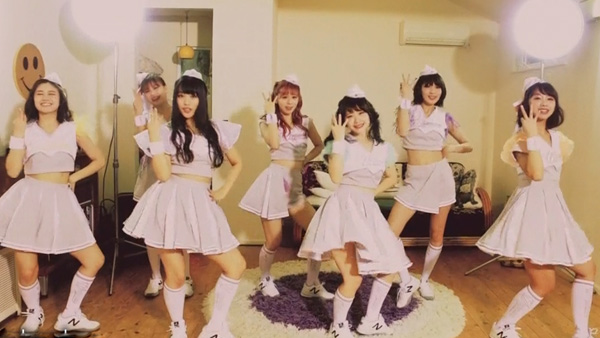 PASSPO fans had a lot to worry about this past year. We started off 2015 by losing Okunaka Makoto, and just a few months later lost Makita Sako to a hiatus that did end up becoming a graduation. And then, to top things off, the group announced a label change from Universal Japan to Nippon Crown. PASSPO are getting up in age by idol group standards, so graduations and administrative changes are not what we want to see. Luckily, we’ve started off 2016 with a pretty hype PV.

Honestly, this video reminds me a lot of PASSPO’s indie days, and as a huge fan of that older material, I’m pretty into it. The video takes us to a select few set pieces where we see the girls dance, apply make-up, and mess around with instruments. Formulaic perhaps, but quite fun.

We’re also confronted with quite a few after effect pop ups featuring all of the random English in the song. Sure, there’s usually a bit of English in J-Pop songs, but PASSPO always has a pretty generous amount. It’s not very intrusive, though. In fact, it’s pretty much a part of their formula.

The outfits for this single are probably some of the most un-PASSPO ones I’ve seen. They “feature” really dull colors and look more like cheap cheerleader outfits than flight attendant wear. They’re a bit on the meh side, but luckily we’re treated to some pretty nice pajama wear in the make-up application shots. Anyone with a preference for PASSPO’s skin will be quite happy here. Legs aplenty, and Iwamura Natsumi in particular is hardly wearing anything at all. No complaints here. Ahem.

Song-wise, again, very reminiscent of indies-era PASSPO. Given that their older music is some of my favorite music period, J-Pop or otherwise, I’m thrilled. It’s always nice to go back to this fun pop-rock stuff. I’m a fan of their newer stuff as well, but stuff like “Go On a Highway”, “Pretty Lie”, and now this…It’s exactly what I’m looking for. This is a rock solid PV and song.